Remembering the 60th anniversary of the E-type launch

Remembering the 60th anniversary of the E-type launch. By Ian Cushway, 7th May 2021

Picture the scene. The date? March 16, 1961. The place, a restaurant close to the Parc des Eaux Vives with the shimmering Lake Geneva nearby creating a perfect backdrop. Overflowing flutes of fizzing champagne majestically circulating around the 200 grey suited executives, the sickly scent of Faberge Brut hanging in the cool Swiss air. Well, in truth being March the Parc was probably shrouded in mist (as is often the case) and strong black coffee was likely the beverage of choice - especially for the members of the Jaguar entourage.

You see for a car that's subsequently proved so important, the E-type launch 60 years ago was a bit touch and go. Some consider Jaguar boss William Lyons' focus was elsewhere - namely on the firm's more lucrative saloon offerings. But in truth, it was because no one truly anticipated the amplitude of the maelstrom the E-type was about to create. 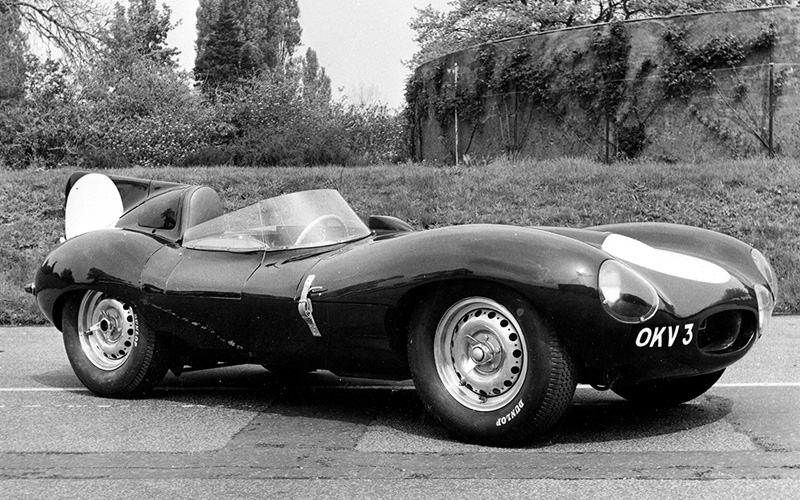 Race to road car
The plan to develop a road-based race car based on the D-type was hatched in the late 1950s, with Jaguar's top engineer William Heynes overseeing the project. Aerodynamicist Malcolm Sayer was given the responsibility of coming up with a suitably slinky profile. The new car would have the suffix E1A – the first of the ‘E’ series, with ‘A’ standing for aluminium.

Lifting the XK engine from the 2.4 saloon a pair of prototypes were made in 1958 with a separate space frame chassis, riveted alloy body panels and a revolutionary independent rear suspension setup. Painted pastel green, racing driver Mike Hawthorn was drafted in for testing and so good were the initial results that the project was given the go-ahead.

The thinking behind the E-type was simple; it was to be a race-bred road car with grand tourer comfort and scintillating performance and handling. The cockpit featured welded steel pressings, with an all-new independent rear suspension carried in its cradle underneath. Meanwhile, the front was made up of Reynolds 541 square section steel tubing containing the engine and supporting the front suspension. A smaller tubular subframe was fixed to the front of this, carrying the radiator and anchor for the bonnet which hinged upwards and comprised the entire nose section. With the right engine, it was guaranteed to be a winner.

Ready to roll
In 1960 a limited number of hand-built pre-production prototypes were made by Jaguar's experimental department – including one in Cotswold blue and one in Carmen red – and these were shown to the press using the same engine as the outgoing 3.8 XK150S with triple 2in SU carbs attached to the pre-war design four-speed Moss gearbox. Dunlop calipers were also taken from the outgoing XK while the front suspension was based on the D-type racers with torsion bars at the front coupled to rack and pinion steering. The independent suspension at the rear was housed in a separate frame with the diff mounted with universal jointed driveshafts which doubled as upper wishbones. Beefy lower wishbones supported twin coil springs over dampers each side, with accompanying in-board discs. As we now know, it formed the perfect recipe for the perfect road car, being light yet lithe with scalpel sharp handling.

The price when new of the Roadster was £2098, while the fixed-head coupé was £98 more at £2196. While that was almost 200 times the average weekly wage at the time – which equates to well over £100,000 today – the E-type still represented excellent value and was a fraction of the price of an equivalent Ferrari. Indeed, that was part of its huge attraction. 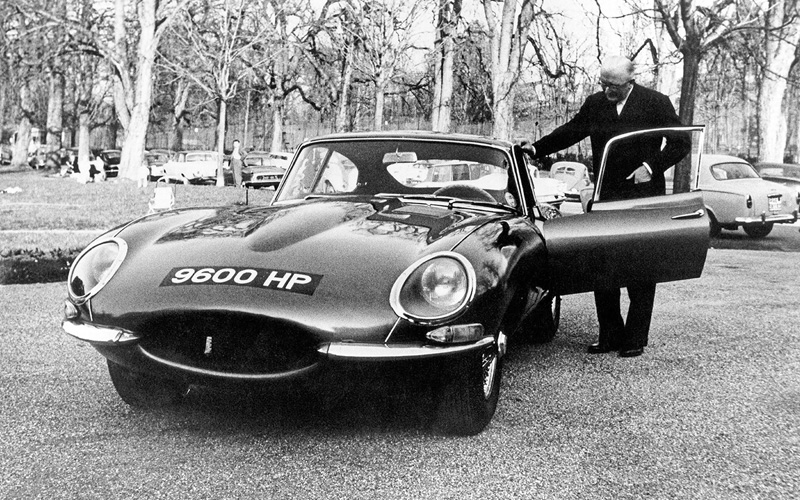 A bit last minute!
And so to the launch. With the official show car (chassis number 885005) crated up and on its way to Switzerland, Jaguar realised the press would want to drive a demonstrator so one of the hand-built prototypes, registration 9600 HP (chassis number 885002) was selected to make the trip. It had been loaned to a select number of motoring journalists in the immediate lead up to the launch, leaving scant time to get it to get it to Geneva. So much so that Jaguar executive Bob Berry was told to drive it flat out through thick fog from Coventry to get there, leaving just minutes to spare. A bit of a faux pas on the logistics side, given the car had taken almost four years of development!

Indeed, according to the Jaguar site it arrived with just 20 minutes to spare before the big reveal, with Jaguar founder William Lyons exclaiming, "Good God, Berry, I thought you were never going to get here," as helpers quickly wiped it clean for the eagerly awaiting journalists. Berry's experience racing D-types in the 1950s no doubt helped on this occasion. 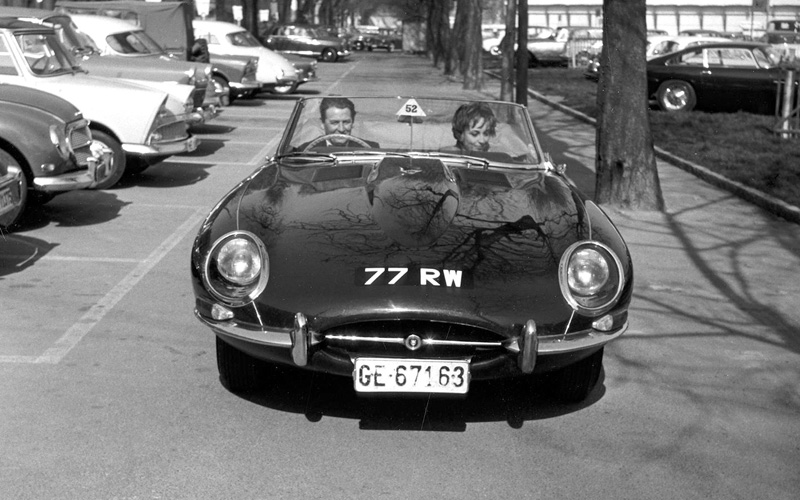 The oldest E
Obviously underestimating the press frenzy the car would create, another E-type was hastily requested in Geneva – the first production open two-seater, 77 RW, built in February 1961. Again, it was all terribly rushed. Told to 'drop everything' it was driven on a white-knuckle 11-hour overnight run to Geneva by Jaguar's then test and development engineer Norman Dewis who was putting it through its paces at the MIRA test facility when he got the call. Incredibly, Dewis averaged 68mph for the entire trip! Remember, this was before the proliferation of motorways in mainland Europe so much of the journey must have been on single-carriageway roads passing through sleepy towns and villages on route. That car is now in the Jaguar Heritage Trust collection.

We need another!
A necessary pre-requisite was that the E-type had to be able to achieve 150mph and immediately post launch Autocar magazine took 9600 HP with its aluminium tailgate, Perspex rear windows and minus its front overriders (to make it quicker) to an unused section of autoroute outside Jabbeke in Belgium. And we're pleased to report, despite several unfortunate mishaps – including a door flying open on one run – the goal was achieved.

The prototype was then used by Norman Dewis to drive to France to test the Jaguar MkX. On his return it resumed its role as a press car, was converted by the factory to RHD and sold to Coombs of Guildford in early ’62. The next owners were film director/author/artist John Paddy Carstairs, former Jaguar and Aston Martin works sports and F1 driver Jack Fairman, architect David Lockhart Smith and then Derek Brant, from whom the current owner, Jaguar XK historian and author Philip Porter, purchased the car in 1977. 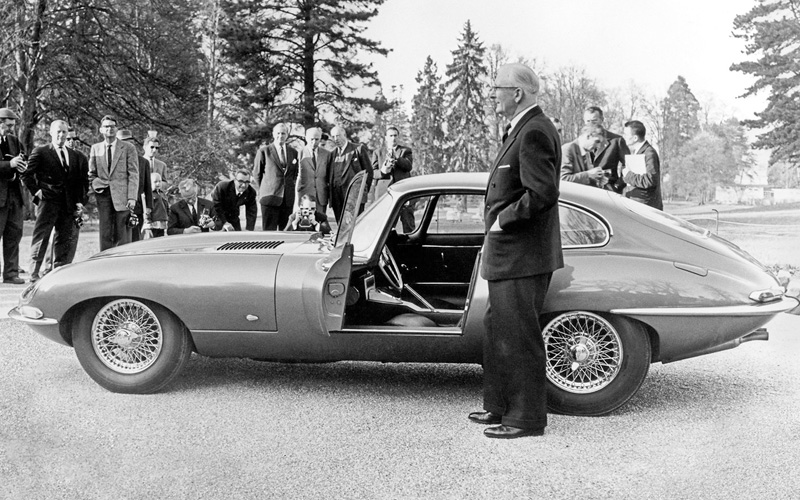 Priceless!
Given this, it seems impolite to talk about values but we will anyway! Back in 1966 9600 HP was advertised as a 'potential collector's piece' for £950. Two years later, it was put up for sale again, this time for marginally more at £975. In 1972 it was offered to Jaguar but the company declined, then in 1976 it was sold for £1350. The new owner obviously wasn't that enamoured with it because it was sold again the same year for £1600.

It was subsequently purchased by a collector and was in a very sorry state when Philip purchased it. Today, of course, having undergone a full restoration by Classic Motor Cars, we'd say the sixty-something Jaguar is, well, priceless...